Braving almost freezing temperatures and fierce November winds, flanked by active military members, his fellow veterans, and cheerful volunteers, Ernie Andrus crossed through Cloudcroft at approximately 8:30 AM on Saturday, November 8th, completing another piece of his arduous, and amazing, journey. Andrus’ goal to run across the United States would be a lofty one for anyone, but Ernie Andrus isn’t just anyone: he’s a 91 year old WWII veteran, raising money to sail the only remaining operational WWII LST ship to Normandy for the 75th anniversary of D-Day.

You wouldn’t guess Andrus is in his nineties by the look of him – he has the calf muscles of a gladiator and the face of a man twenty years his junior. He’s garrulous, with a quick and charming laugh. Andrus remembers vividly when the war started for him. It was his senior year of high school, and he and a friend were riding in his Model A Roaster when an announcement came over the radio that Pearl Harbor had been bombed. “’I looked at my buddy,’ Andrus recalls, ‘and said, ‘Where’s Pearl Harbor?’ My buddy said, ‘I don’t know, but I think we’re at war, so let’s go join the navy!’” 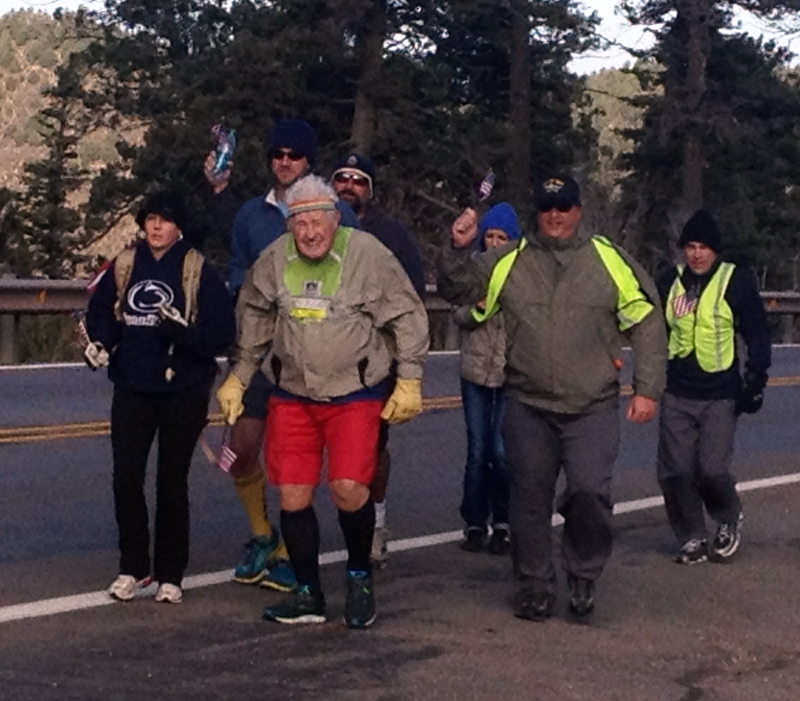 Andrus’ experience in the war was eventful, to say the least. He served for the first part of the war on the USS Rochambeau, transporting troops and wounded in the south pacific. As a corpsman, Andrus was stationed at a gun. The USS Rochambeau navigated these treacherous waters alone after her two escorts were both sunk, and the USS Rochambeau’s captain ordered that they sail unescorted.  Despite these enemy infested waters and perilous routes, Andrus’ ship never saw any immediate action. The closest Andrus came, he said, was when awaking one night to an explosion and the resulting klaxons and a call to arms. Andrus was sure they’d been hit by a torpedo; in reality, one of the ship’s boilers had explode.

Later, Andrus served in the hospital corp. of on the LST 124, the ship on which he would remain until the end of the war. He remembers watching the sea battles from a porthole, but says he was always optimistic. “Me and my buddy were over there and we saw all this action, and we never worried about getting killed.” Their confidence proved providential, and both returned to the United States after the war was over. Andrus’ ship, the LST 124, was later scrapped.

Andrus was not content to returned to an ordinary life, however. In 1984, when the Olympics came to Los Angeles, Andrus decided to take up running, and ran the same path of the Olympic torch. A passion was born. “I never won an award until I turned 70,” Andrus laughs. “After that, I always took [a place.] There’s not much competition. The only time I didn’t get an award was Whisky Row, and I only ran the 10k. But they had a 60 and over category, and I was 70. I can’t compete with these guys!” He was eighty-seven years old when he ran his first half marathon, and at age eighty eight, ran his first 200 mile relay – he confessed to having so much fun, he quickly ran three more.

In 2001, Andrus was part of the crew that returned the LST 325 from Crete, Greece, to the United States, and was featured in the History Channel documentary “The Return of the LST 325.” However, he didn’t feel that the LST was quite done yet. Realizing how much attention he was getting for his age, Andrus decided to combine his love of running with his desire to return the LST 325 to Normandy. “I decided well, maybe I can raise some money and try and get it over there.” He began October 7th by dipping his fingers in the waters off San Diego, CA, and hopes to finish near Brunswick, GA, by doing the same thing. He runs three days a week, averaging between thirteen and twenty six miles per week, and has so far completed almost a thousand miles. As for a timeline for his journey’s completion, Ernie is optimistic – he’s shooting for between two to four years to reach the other side of the United States, and hoping to be the oldest man who’s ever ran from one ocean to the other.

This article originally appeared in the November 2014 print edition of the Mountain Monthly.