Pet Tails is a monthly column by Contributing Editor Liz Beasley. It follows the adventures of her faithful friend and companion, Angus the dog.

Most mornings, our dog gets to go for a walk, and naturally we have to go with him so we get one too. Some walks are more exciting than others.  For instance, one morning in September, around the time of the heavy rainfall, our dog, Angus, spotted the deer family before I did. He’s pretty well behaved and almost blasé about deer; he usually just chases them if they are on his property, but he loves to stalk!  They were sure watching him though and he was in stalking mode. This particular family had three fawns, who were getting to be fairly decent size; however, the family decided to cross the street and get a bit farther away, while keeping an eye on him. As we walked past them, I realized one fawn had stayed behind and was not sure what to do. I kept watching after we passed the area, and she (or he!) finally crossed the road.  Since there was a slight drizzle, we were turning around to head back home sooner than usual.  She stopped and was busy studying Angus. Don’t you wonder what they are thinking? He was totally ignoring her and just busy sniffing for other critters. After a few seconds, the fawn turned and bounced off, tail in the air.  She was beautiful!  I continue to find it amazing that such tiny legs can support so much body on deer and elk! 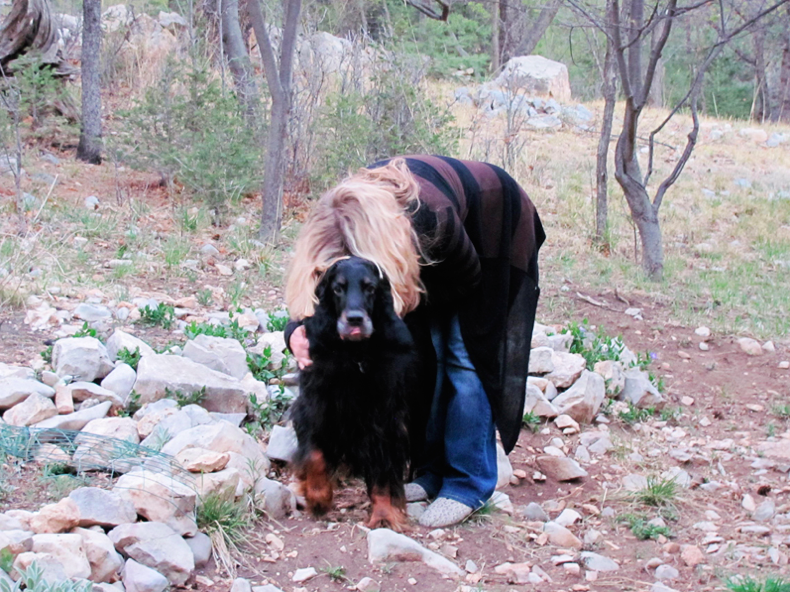 Our dog is a beautiful, oops, handsome (!) black and tan Gordon Setter.  For those of you who haven’t met any Gordons, they are great family dogs, are a Scottish-bred bird-hunting dog  and are usually affectionate, smart, and opinionated. He loves to explore, stalk, point, and, of course, sniff everything he can find. I would like to say he is fearless, but that only applies to deer, elk, other dogs, cats, and bears!  If I get out the nail clippers or even his brush, he starts trembling. He heads off in the other direction when our daughter says the word, “Bath!”. He hates personal grooming, but really thinks he looks great afterward!  Go figure!

My husband had dogs when he was a child, but my first ones were found just a few months before we got married. He wanted to take me for a drive over to visit a Bouvier des Flandres family. His plan was to get a male dog; we left with a male and female!  I am so glad we got both of them.  They had a great time playing, digging, and doing other fun stuff while we went off to work.  Since then, we have had different breeds of dogs, some rescue and some from breeders. We have loved them all.

We moved here with a Bouvier des Flandres.  Bouviers tend to be wonderful family dogs and great watchdogs. She was beautiful and was one we adopted as a rescue dog.  Overall, she had good care growing up, however, sometime before we adopted her, she developed a strong dislike for men wearing caps and an even stronger “dislike” for men wearing caps and smoking!  She got pretty tough with those smokers and made a pretty good Smokey Bear for us!

I was talking with a friend who told me a pet story from their early days here on the mountains. When they moved, they brought along 4 cats and 2 dogs so you know their move was event-filled!  Before construction on their house was completed, they rented in the Village.  Her 2 dogs were used to having a fenced yard and not at all used to being on a leash. When she first started walking them, she had to be a contortionist!  These two, named Prudy and Sadie, by the way, would head off in opposite directions, leaving my friend with arms stretched out, just trying to hold on! One time while this was happening and she was focused on trying to get the dogs pulled back, she ran head long into a stop sign and smacked her forehead!  Fortunately, she was wearing a cap and the brim took the brunt of it, allowing her to keep her nose intact (this would have been the third break for her poor nose)!  My first thought would have been to look around and make sure nobody saw me! Thankfully, she didn’t have to walk her 4 cats!

This article was originally published in the May 2011 print edition of the Mountain Monthly.