By Peg Crim and Joe Garcia

Work continues on a historic train trestle that once transported people wanting to escape the desert heat and part of the logging industry in the early 20th century.

As you drive up US Highway 82 from Alamogordo, you will see the Mexican Canyon Trestle (MCT) just south of Cloudcroft, NM. You may see some small orange spots moving gracefully around the MCT and large timbers hanging in mid-air, suspended from a big crane. Those orange spots are Osmose Railroad Service employee’s hard hats and shirts. The company recently returned to this area to finish stabilizing the south half of the Trestle. The north half, consisting of the first 11 bents (or vertical supports), was stabilized over a year ago, possibly keeping the MCT standing through a long winter of snow, ice, and high winds. 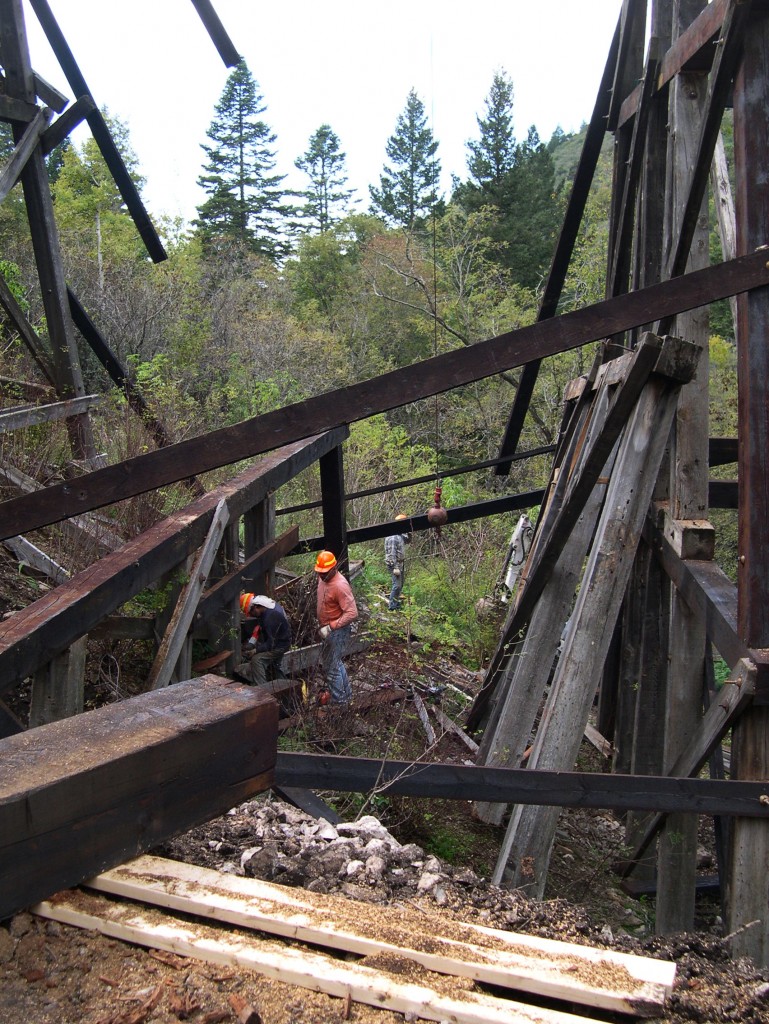 The rescue to stabilize this piece of history began with grants and appropriated funding procured by a partnership of interested individuals and organizations. In October 2008, an initial contract was awarded to Osmose. In the spring of 2009, Recovery Act funds became available through the New Mexico State Highway Department and the US Forest Service, allowing stabilization of the MCT reaching the half-way point.

Dan Miles, Project Manager for Osmose said, “This is the kind of work crews do all the time. The difference is that most of our projects are accessible by rail. We had to come down a mountainside to get to this one. Once we got here, the work is pretty much the same as what we normally do, just not to this scale. We rarely have to tear down and rebuild to this extent—they never allow a railroad bridge with trains going over it to get this bad.”  Miles expects the MCT to stand for another 100 years or so once the entire structure is stabilized. “With no trains running on it, regular maintenance, and no acts of God, like lightning strikes or such, it could last for over a century.”

Osmose crews repair railroad bridges all over the United States and Canada. According to Miles, “In other locations, they say, ‘Whoop-de-doo, they are rebuilding a railroad bridge.’ We have been totally surprised at the number of people that come to watch us work on the MCT. It is neat to see people take that kind of interest in what we are doing and to be complimented by them. The appreciation from the public both local, national and international does not happen to us every day, as a matter of fact, this is a first.”

The Mexican Canyon Trestle stabilization project has contributed to the economic vitality in New Mexico’s southeastern communities. “You’d be surprised at how much money we spend here,” Miles said, when asked about the impact of Recovery Act funding. Thousands of dollars are infused into the local economy through road building, transportation and disposal of unusable material, equipment rental, purchase of supplies, and hotels, restaurants, and leisure activities for the six-man crew during the construction period. Local pistachios have been a popular purchase for the crew during their time here. 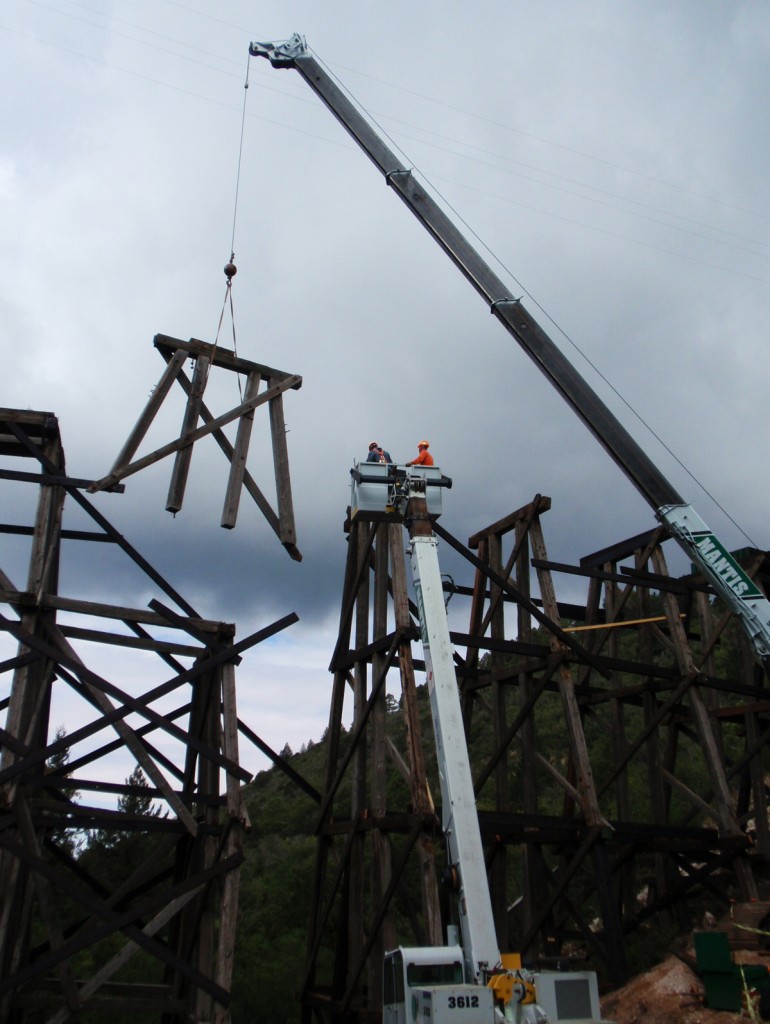 Manny Gonzales, who began working on the Mexican Canyon Trestle project as a field deputy for former Congressman Steve Pearce, credits the partnership that came together several years ago with making the project ‘shovel-ready. “It paid off when Recovery Act funds became available, and it is great to see that beautiful structure being given new life,” said Gonzales. Gonzales also sees the project as a way to honor his grandfather. “I grew up admiring my grandfather who hailed from Illinois. I enjoyed his fantastic stories, beautiful books, and great paintings of railroads. He would travel down to the border to help process and transport the “braceros,” or “strong arms” that helped build the railroad. My grandfather’s claim to fame was that he could even build railroad tracks on quicksand.”

Next spring, work will begin to move the highway toward the hillside and build a parking area and scenic vista on the trestle side of the highway. Interpretive signs will showcase the railroad history of the Sacramento Mountains.

The Alamogordo and Sacramento Mountain Railroad built the Mexican Canyon Trestle in 1899 to access timber in the forest. After that, the railroad transported tourists to Cloudcroft. For almost 50 years, the trestle was used and maintained regularly by the railroad until abandon˘ed in 1947. It has welcomed residents and visitors to Cloudcroft for almost 60 years with few changes and no maintenance.

About 15 years ago, Lincoln National Forest personnel and New Mexico Rails-to-Trails members became concerned about the condition of the trestle. Osmose completed an engineering study identifying timber condition and replacement needs. While many of the vertical timbers are still quite sound, the horizontal timbers which collect and hold moisture have deteriorated, requiring replacement to keep the trestle standing. Prior to stabilization, visitors to the site may have noticed a dip in the middle of the trestle where horizontal timbers located in the lower part of the structure had failed.

In 2006, Congressman Steve Pearce learned of the project and gave his support. He reminisced about coming to Cloudcroft as a child and visiting the MCT. A coalition formed which included the Forest Service, New Mexico Rails-to-Trails Association, the Congressman’s staff, the Village of Cloudcroft, New Mexico State University Engineering Department, Burlington, Northern and Santa Fe Railroad, Weasel Productions of Ruidoso, and Tzec Maun Foundation.  Procuring of funds occurred through various grants and appropriations. Village of Cloudcroft Mayor Dave Venable said, “This is a perfect example of what can be done when people put their heads together to accomplish something for the good of the community. This is something we can leave for future generations to admire.  Now it is time to get after it!”

Local individuals and groups have shown their love and admiration for the trestle by volunteering their time to remove the vegetation that had grown around it, allowing contñractors to access the trestle for their work. Volunteers include El Paso Ridge Walkers, Boy Scout Troop 147, Alamogordo Civil Air Patrol, HAFB First Sergeant’s Association, and many individuals from New Mexico’s Otero County to El Paso, Texas.
A scenic drive on US Highway 82 displays the joint coalition efforts to restore this historic railroad trestle. 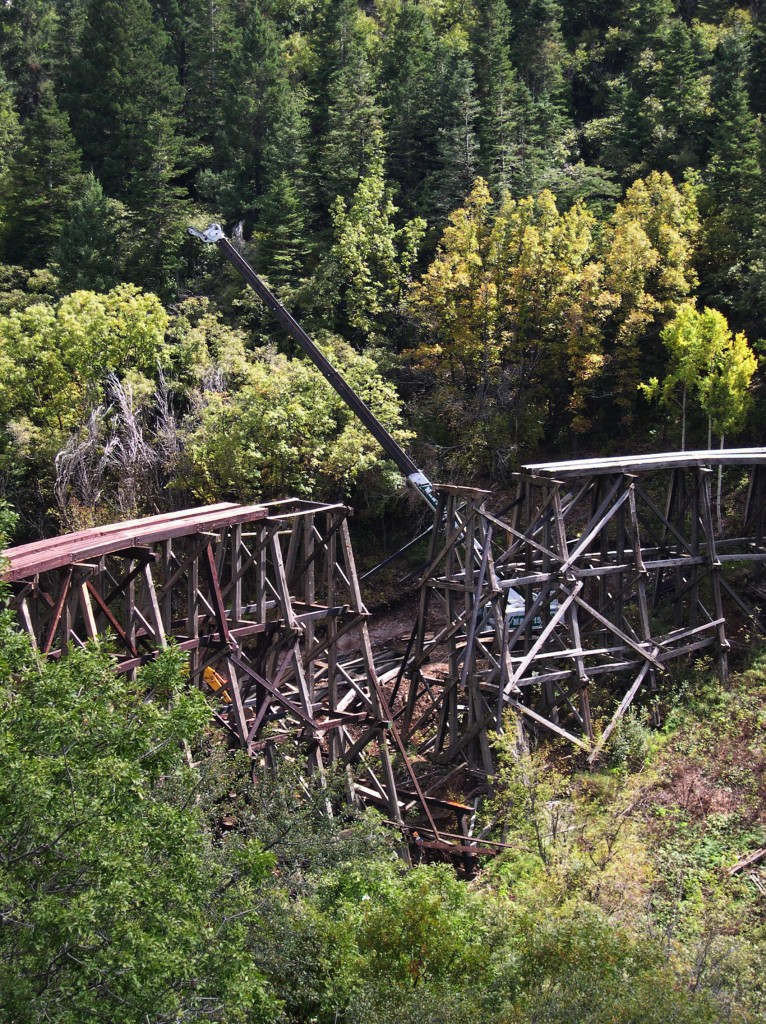 This article originally appeared in the October 2010 print edition of the Mountain Monthly.