You can smell fall in the mountains.  After the summer rains, the air is both clean and crisp.  The early morning temperature was just 45 degrees, so I grabbed a light jacket, rounded up the wiener pups and went outdoors to join the critters.  A magnificent ten-point buck that was grazing on the corn stopped momentarily to investigate the barking; then resumed eating his morning treat. 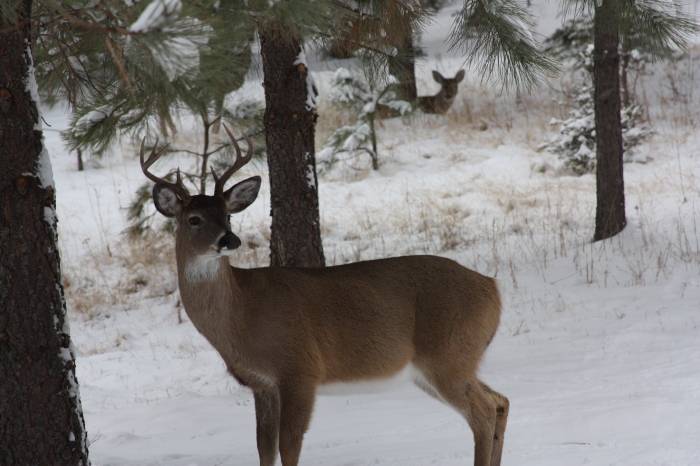 Out past the barn, we stopped to inspect my Texas rock garden.  Holly picked up the scent of some wild thing, and tugged with fierce determination toward the old stump nearby.  I held her leash in check to determine what had her attention, because most critters are much larger than she. As I neared the old stump, there was a somewhat plump “horny toad,”  which is Texan for horned lizard that made a quick dash for the safety of a root and disappeared under the leaves and pine needles.  On the upper bank there were several doe lying in spots where the morning sun filtered through the trees.  They watched our progression, but they remained as they were…just soaking up warmth from the sunny rays.

Starting up the western trail, I heard the familiar tapping knock of an Acorn woodpecker.  I stopped along the path to watch as the woodpecker walked up the Douglas fir trunk to be met by a white-breasted nuthatch taking the escalator down. Oops, there was going to be a collision mid trunk! Then just before contact, the woodpecker hopped over a bit to the left, and the nuthatch to the right.  Seems they are better drivers than many of us two legged critters.

Turning east and heading toward the ravine, I caught the faint smell of wood smoke from a neighbor’s chimney. Coming upon my transplanted daisies which the deer found tasty thus I had resorted to stacking protective branches in campfire fashion to deter the critters.  I smiled noting the critters had not touched the clumps of wildflowers nor my booby traps. Deer are always alert to subtle changes within their territorial range and will skirt the new item for several days until it becomes a familiar sight.  They are circling the newly erected 5-foot fence around my flower garden, a deterrent only, as they can easily hurtle 7 to 9 foot fences without a vault pole or running jump.  Can whitetail deer compete in the Olympics?  They would be sure to bring home the gold!
My morning walk ended with the scent of cinnamon rolls baking and fresh coffee brewing.  I could hear my sleepy head in the shower.  Soon he would be off to an early choir practice at church. Gracious! Cold weather and the Holiday season are nearly upon us!  Where does the time go anyway?

This article originally appeared in the November 2012 print edition of the Mountain Monthly.