Some of the most colorful and interesting insects can be found in the family of odonates, which includes dragonflies and damselflies. New Mexico is home to several hundred species of these large insects which can range in color from bright reds and oranges to shimmering emerald greens and bright turquoise blues and purples. Their size and colors, and their behaviors, especially in flight, make them a favorite for collectors and fun and interesting to study. Although more species may be found in wetland areas such as the Bosque del Apache or Bitter Lakes Wildlife Refuges, a variety of them can be found in the Sacramento Mountains especially along the Rio Penasco and near stock tanks and ponds. Dragonflies are considered aquatic insects because their eggs are actually laid in water and the young larvae will live in water, having several pairs of internal gills, as they develop. It is only as they emerge as an adult that they leave the water and begin their life as flying insects. Damselflies differ in that they lay their eggs on various plants. 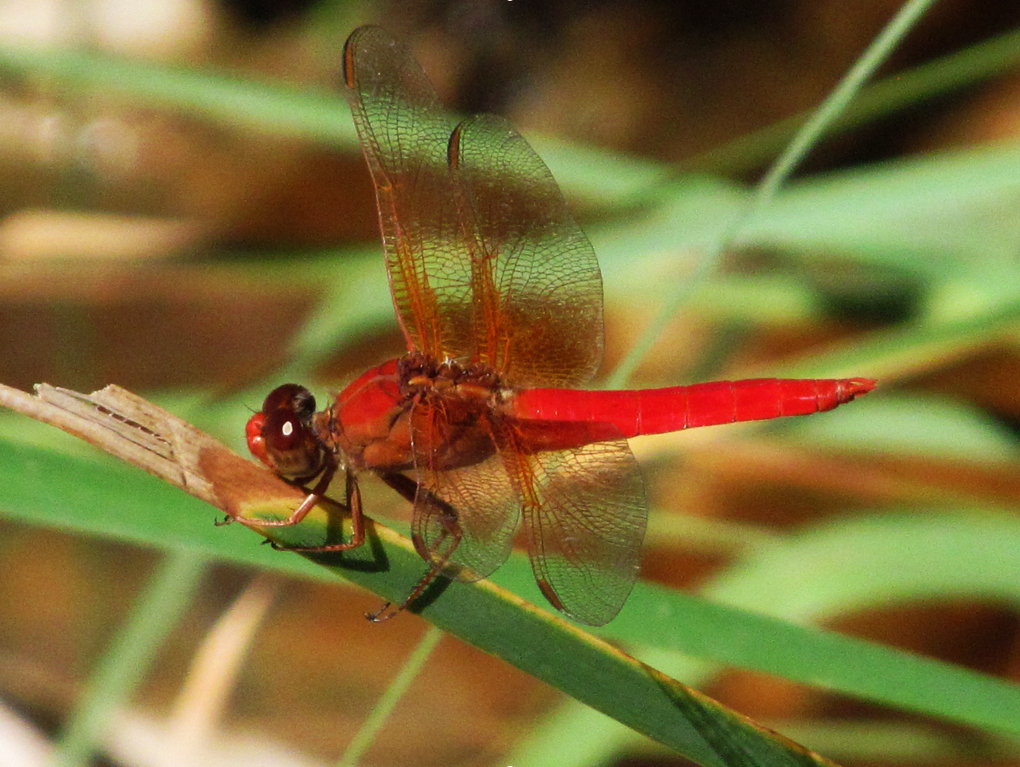 The larger of the species of odonates are the dragonflies. They are bigger in size and more robust in body than then the damselflies. When a dragonfly comes to rest its wings are extended horizontally and there is a marked difference in the two pairs of wings. The forewings are longer and narrower while the hindwings are shorter and thicker. Damselflies have a more delicate body and will land with their wings extended backwards. Both pairs of wings are the same size. Dragonflies are especially noticeable for their large, rounded eyes which meet at the front of their head. Damselflies have smaller eyes which are separated. Mike Bilbo, who is with the BLM in Roswell, is an expert on Native American pictographs and believes that the tloloc pictograph, which is found throughout the Southwest and represents the Aztec rain god, is probably a depiction of a dragonfly because of its large round eyes and its association with water.

Dragonflies are very hearty predators and will eat a great number of smaller flying insects, especially mosquitoes, which is a bonus feature in having them around. Dragonflies are among the largest of insects and have been around for millions of years, with fossil specimens which are even older than the dinosaurs. Some fossilized specimens, such as meganeura, have a wingspan of up to 18 inches. You would sure notice if one of those lit on your head.

One of the best ways to find out about these fascinating insects is to go to the annual Dragonfly Festival which is held every September at the Bitter Lakes Wildlife Refuge near Roswell. The festival is becoming quite the event with bigger and better programs every year including guided tours by top entomologists, park personnel, and volunteers, as well as activities for kids and families, photography tours, endangered species tours, and even a free hot dog lunch. For more information about the festival or the refuge, visit www.fws.gov/southwest/refuges/newmex/bitterlake. There is also an excellent field guide available entitled “Dragonflies and Damselflies of the Southwest” by Robert A. Behrstock. The 82-page book gives detailed descriptions, names, seasons, and distributions for these fascinating insects. The next time you see one of these guys flitting around, watch it for a few minutes. You might find it enlightening.

This article originally appeared in the July 2011 print issue of the Mountain Monthly.